Alex_Axe from Molgen forum announced the release of a new tool Oracle_AdMix4.
Basically, you can think of this tool as an useful add-on that extends the Oracle two-population results into four-population format.

Currently the tool support only DOS/Windows platform, and its usage is quite straightforward. The current distribution of  Oracle_AdMix4 includes the required file (data.txt) with the frequencies of 22 components in each of reference populations. The second file - input.txt - is the one you need to modify in order to use the tool on your own World-22 calculator results:

All you need to do is to change the default values of components with your own results of World-22 calculator.

The output should appear in the following format:

Posted by Project "Magnus Ducatus Lituaniae" at 11:55 AM 22 comments:

The levels and dating of admixture in Belorusians

Below  you can glean the results of experiment which i deem less noisy in contrast to my previous attempt.

jackknife (generations)   105.086+-52.591
The date of admixture event in Belarusian_V sample with Belarusian and Pathan being reference populations appears to be very close to the date which was estimated by Dienekes for Lithuanian [Lithuanian_D;Pathan].

On 1 November 2012 Po-Ru Loh, Mark Lipson, Nick Patterson, Priya Moorjani, Joseph K Pickrell, David Reich, Bonnie Berger announced and published their new paper, in which they introduced a new approach that harnesses the exponential decay of admixture-induced linkage disequilibrium (LD) as a function of genetic distance. They proposed a new weighted LD statistic that can be used to infer mixture proportions as well as dates with fewer constraints on reference populations than previous methods.


I haven't had enough time to investigate this method in full extent, but i used a software package ALDer which implements the weighted LD statistic for a quick & dirty experiment of dating the admixture events in Belarusian sample:

ROLLOFF analysis of Poles, Belarusians and Russians from central regions of Russia

A month ago  the notorious Reich lab released an alpha version of ADMIXTOOOLS version 1.0. The alpha version package was developed for in-house use, so the operating routine is not always self-explanatory. The goof thing, however, is that ADMIXTOOLS package maintains full format compatibility with another very well-known EIGENSOFT software program developed by the same lab. This makes the learning curve of ADMIXTOOLS much steeper and flatter.

The aforementioned package features 6 cool programs, among which i find most useful qp3Pop and rolloff. Due to limitations of this post, i am not going to discuss qp3pop in all details and for the purpose of my presentation it is suffice to say that this program implements three- population (f_3) test for treeness of populations from Reich et al. 2009
Rather i'd suggest reading ADMIXTOOLS supporting material, Dienekes' posts and Reich's paper to get an idea of what f_3 test is about.

Dienekes has already tested ADMIXTOOLS programs with various worldwide populations, and among other he has carried out f_3 and rolloff analyses of Poles, Lithuanians, and Ukrainians.

Below are words from the man himself:

Using the aforementioned idea, I set out to see whether Lithuanians, who occupy the European end of the Europe-South Asia cline present such a signal of admixture LD. I used the Lithuanian_D sample from the Dodecad Project and the Balochi HGDP sample as reference populations (to calculate allele frequency differences), and the Behar et al. (2010) Lithuanians for admixture LD. There were only ~300k SNPs usuable in this set, but sufficient to detect the signal of admixture LD:
The admixture time estimate is 200.350 +/- 61.608 generations, or 5,810 +/- 1790 years. This is not very precise, probably because of the small number of SNPs and individuals used, but it certainly points to the Neolithic-to-Bronze Age for the occurrence of this admixture. The date is certainly reminiscent of the expansion of the Kurgan culture out of eastern Europe, or, the later Corded Ware culture of northern Europe.

So, it may well appear that at least some of the people participating in these groups of cultures, were indeed influenced by the Indo-Europeans as they expanded from their West Asian homeland. These intruders mixed with eastern Europeans who vacillated during the late Neolithic between a northern Europeoid pole akin to Mesolithic hunter gatherers from Gotland and Iberia, and a widely dispersed Sardinian-like population that is in evidence at least in the Sweden-Italian Alps-Bulgaria triangle. The gradual appearance of non-mtDNA U related lineages in Siberia and Ukraine is most likely related to this phenomenon.

......
I have carried out rolloff analysis of my 25-strong Polish_D sample using Lithuanians and Pathans as references:

The signal is fairly distinct, and corresponds to 149.296 +/- 38.783 generations or 4330 +/- 1120 years. I am guessing that either the different reference population (Pathans vs. Balochi), or, more likely the increased number of target individuals (25 vs. 10) have contributed to the narrowing down of the uncertainty. It will be interesting to explore this signal further with more population pairs.

I have used the Yunusbayev et al. sample of Ukrainians, and estimated its admixture time using Lithuanians and Balochi as reference populations: The admixture time estimate is 191.078 +/- 35.079 generations, or 5,540 +/- 1,020 years. It seems very similar to that in Lithuanians, with a smaller standard error, perhaps on account of either the larger number of SNPs or larger number of individuals.

It is tempting to associate this admixture signal with the Maikop culture which appeared at around this time. Assuming that North_European/West_Asian (or Lithuanian-like and Balochi-like) gene pools existed north and south of the Pontic-Caspian-Caucasus set of geographical barriers, then the Maikop culture which shows links to both the early Transcaucasian culture and those of Eastern Europe would have been an ideal candidate region for the admixture picked up by rolloff to have taken place. There are, of course, other possibilities.


As always, Dienekes' analysis spawned a lot of criticism on behalf of another genome blogger - Davidski from Eurogenes. In his latest post he argued  that it’s difficult to say what this experiment was testing exactly because Pathans aren’t pure West Asians and Lithuanians aren’t pure Mesolithic Europeans. He also claimed that Dienekes' interpretations are  wrong, because f3-statistics and rolloff tests are basically picking up (belated) signals of the Mesolithic and Neolithic peopling of Europe.

Since the aforementioned populations have the strongest presence in my dataset, and there is no consensus-opinion between genome bloggers on how to interpret the ADMIXTOOLS  i've decided to put my 5 cents and  to test ADMIXTOOLS.

For the purposes of this analysis, i created ad-hoc dataset, which includes 750 000 snps samples in 250 worldwide populations.  Next, i made 3*62 000 trios in the following form (X,Y; Z), where X and Y are two paired reference populations, and Z is one of three populations - central Russians, Poles and Belarusians. After that i carried out q3Pop analysis of those trios.

From the obtained results I have picked up only those with significant negative Z-score:


As it looks at first glance,the results of my ad-hoc experiment with 3qPop seems to be consistent with the findings in Patterson et al.2012 paper: "the most striking finding is a clear signal of admixture into northern Europe, with one ancestral population related to present day Basques and Sardinians, and the other related to present day populations of northeast Asia and the Americas. This likely reflects a history of admixture between Neolithic migrants and the indigenous Mesolithic population of Europe, consistent with recent analyses of ancient bones from Sweden and the sequencing of the genome of the Tyrolean ‘Iceman’".

Given that, i'd suggest to rewrite the components of admixtures in Poles in the following manner:

In Belarusians, the sources of signals of additional admixture are less clear and vague.
As was shown earlier, in terms of formal admixture analysis (f3 statistics), Belarusians could be represented as the admixture between Poles and Indian/Cirkassian. The first component of admixture is already known (see above [1]), the second one, according to results, must resemble the component, common to both Indian and Circkassian. From the history textbooks i've learned that the territory of modern Karachay-Cherkessia was occupied in the 1st millenium AD  by the Alans, or the Alani, who were a group of Sarmatian tribes, nomadic pastoralists of the 1st millennium AD who spoke an Eastern Iranian language which derived from Scytho-Sarmatian and which in turn evolved into modern Ossetian. The only currently known most recent ancestral population to modern Alans and modern Indians is Scytho-Sarmatian metapopulation.

Thus, we can re-write the admixture formula for Belarusians in the following manner

Now, after long discussion, it is time for the admixture_dating fun!

To estimate the admixture date in Polish population, i used as reference populations Latvian and North-Italian

The admixture date is  119.670+-37.145 generations ago, which corresponds to 3470 +-1077 years before present, or 1510 +- 1077 AD.  The upper limits of our dating for the admixture event seem to overlap with the timescale of Unetice culture. The Bronze Age in Poland, as well as elsewhere in central Europe, begins with the innovative Unetice culture, in existence in Silesia and a part of Greater Poland during the first period of this era, that is from before 2200 to 1600 BC. This settled agricultural society's origins consisted of the conservative traditions inherited from the Corded Ware populations and dynamic elements of the Bell-Beaker people. Significantly, the Unetice people cultivated contacts with the highly developed cultures of the Carpathian Basin, through whom they had trade links with the cultures of early Greece. Their culture also echoed inspiring influence coming all the way from the most highly developed at that time civilizations of the Middle East. 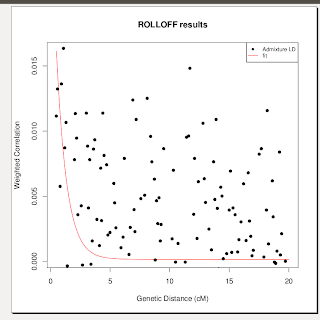 Various methods for detecting IBD, including those implemented in the software programs fastIBD, GERMLINE, Chromopainter have been developed in the past several years using population genotype data from microarray platforms. Now, next-generation DNA sequencing data is becoming increasingly available, enabling the comprehensive analysis of genomes, including identifying rare variants. These sequencing data may provide an opportunity to detect IBD with higher resolution than previously possible, potentially enabling the detection of disease causing loci that were previously undetectable with sparser genetic data.

The similar IBD analyses  have been already carried out by other genome bloggers.
Dienkes Pontikos has performed different fastIBD analyses  for detecting the degree of sharing between various Euroasian and African groups. Davidski of Eurogenes project has also used fastIBD method in his Intra-European chromosome paintings.

I have created ad-hoc subset of various East-European populations by including samples from the following populations: