In the recent paper of Pickrell and Pritchard outlined the most challenging problems in  the analysis of relationships between populations:

To the ultimate relief of genome bloggers, Joe Pickrell and Jonathan Pritchard have released a companion program to Structure/Admixture programs called TreeMix.   TreeMix uses large SNP data sets to estimate the relationships among populations  including both population splits and admixture events.  According to Pickrell and Pritchard, the new method provides a better representation of population histories than do standard tree-building methods when they  are applied to the worldwide populations.  In my opinion, the real advantage of TreeMix over traditional admixture programs is that it accounts for unknown ancestral allele frequencies. Indeed, in most cases  we do not know the ancestral values of allele frequencies, but instead only the values in sampled descendant populations.

I decided to give TreeMix a try on 22 putative ancestral ADMIXTURE components from the latest run. For this purpose, I used a conversion script, which was kindly provided by Dienekes Pontikos. This script takes ADMIXTURE P file and converts it into  a plink.treemix.gz file, which is ready for input into TreeMix. 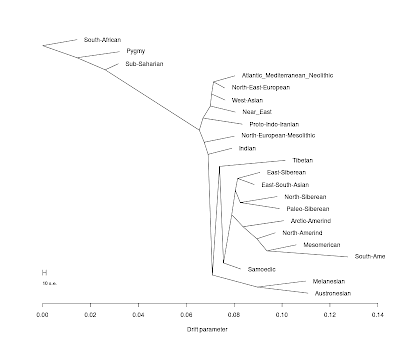 After careful examination of the output tree, i was really surprised by how  remarkably similar the tree is to that one in the original paper of Pickrell & Pritchard: 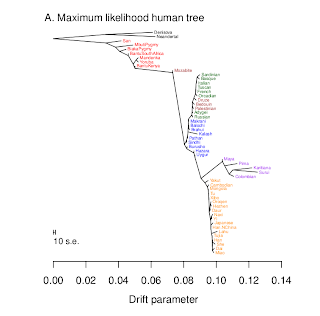 In the next of experiment i have introduced to the tree a rudimentary model of migrations/gene flows by including -m 5 parameter. The model is, however, very rudimentary, because Pritchard and Pickrell have  modeled "migration between populations as occurring at single, instantaneous time points. This is, of course, a dramatic simplification of the migration process. This model will work best when gene flow between populations is restricted to a relatively short time period. Situations of continuous migration violate this assumption and lead to unclear results" (see the cited paper for the further discussion). 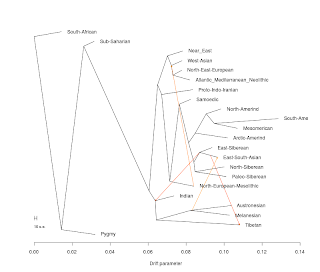 Nevertheless, we may, though with all due caution, speculate about the hypothetical gene flow directions:

The last point d) calls for a further explanation. As one can see from the attached population tree,North-European-Mesolithic component is unexpectedly shifted towards East-Asian populations.  Despite of all simplicity of test, i think that the result in consideration could probably support  a recent statement made by David Reich in the recent Reich et al. (2012) paper:

we took advantage of the fact that east/central Asian admixture  has affected northern Europeans to a greater extent than Sardinians (in our separate  manuscript in submission, we show that this is a result of the different amounts of central/east  Asian-related gene flow into these groups).

If our finding is congruent Reich's hypothesis, then one could assume that he Mesolithic Europeans were Asian-shifted themselves, i.e the earliest episode of admixture could have occurred in the Mesolithic period.

UPDATE:
The same scenario seems to be supported in (Patterson et al. 2012).

Another important question that could be raised in regard of the reliability of the inferred components is the question of 'component purity' (the notion of 'purity' is used here in rather speculative sense of Kant's Reinheit, and has nothing to do with 'racial purity'). Indeed,  a population tree (such as one presented above) could represent with the same degree of reliability both pure nested morphology of components  variable components of nested and non-nested morphology.

is negative when X does not appear to form a simple tree with A and B but appears to be a mixture of A and B (in Dienekes' laconic phrasing).  In order to calculate f3 statistics  i used the implementation of three-pop  TreeMix's  program threepop:

The full f3statistics file could be downloaded here.