This is what he did :

".. To compare components across different projects; there has been a proliferation of different ancestry projects since the launching of Dodecad nearly a year ago, and since all of them slightly different individuals/SNPs/terminology, it is quite useful to be able to gauge how one component from one project maps onto other components in other projects. As proof of concept, I took the MDLP calculator from the Magnus Ducatus Lituaniae Project and generated 50 zombies for each of its 7 ancestral components:
I then inferred the ancestry of the MDLP zombies using Dodecad v3, and vice versa. Since Dodecad v3 also includes populations (e.g., Africans) not considered by MDLP, I did not try to map those onto MDLP. 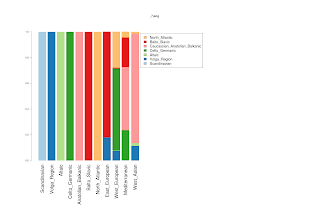 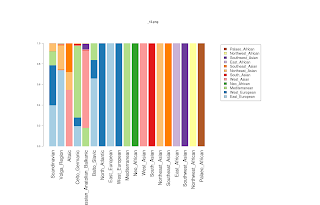 I will comment on the MDLP-to-dv3 mapping:
A different way of comparing the different components is to include them all in a joint MDS plot, or calculate various types of distances between them (e.g., Fst).

For example, the first couple of dimensions are dominated by the African/Asian components of Dodecad v3 that are not present in MDLP.Notice, however, the position of "Altaic", right where one might expect to find it between West and East Eurasians. 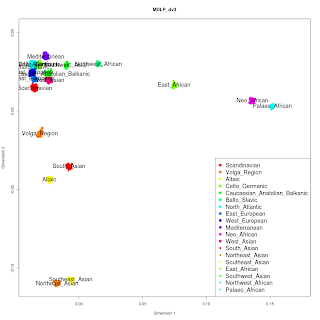 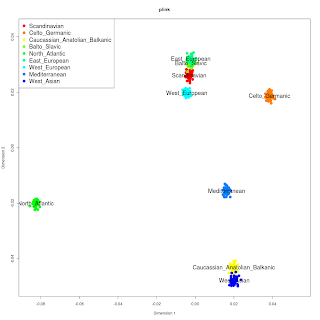 It appears that the "North_Atlantic" component may be centered on a small number of related individuals."


PS. Our MDLP calculator has been occasionally used by various people, and thus results arecurrently being disseminated over the large number of  the different Internet communities of DNA-genealogy/molecular anthroplogy's hobbysts. We are going to collect the results made publicly available by those hobbysts and out them into one spreadsheet for the futher analysis.