7 months of MDLP project: alpha phase is over

We would like to announce that the project has been active for more than 6 months, i.e fairly long to accomplish some of the posited goals. The main goal of the project's preliminary (alpha) phase was to collect a statistically reliable sample for obtaining the statistically significant results. The current dataset (MDLP v2) includes 531 unrelated individuals (379 males, 152 females) with 310652 SNPs, of those 183 individuals (48 Romanians, 2 Russians,17 Chuvashes,12 Uzbeks,16 Turks,18 Armenians,15 Lezgins,20 Georgians,19 Hungarians,8 Lithuanians,8 Belorussians) from Behar et all (2010) dataset.41 individuals from HGDP (25 Russians, 16 Adygei), 175 individuals from the 1000 Genomes Project (83 British, 92 Finns) and 62 individuals from Yunusbayev et all. (2011) paper (14 Mordovians, 16 Nogays,13 Bulgarians,19 Ukrainians). 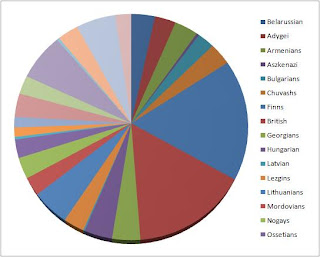 Another interesting characteristics of sample is that one of average inbreeding coefficient in each particular population,  based on the observed versus expected number of homozygous genotypes in given population. 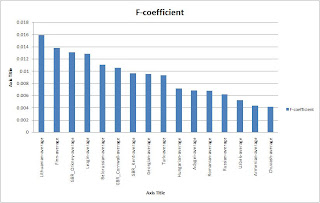 The following characteristic of  MDLP - an average number of shared IBD segments per population is especially valuable for evaluating the genomic structure of population. I've limited the results to Slavic populations only. 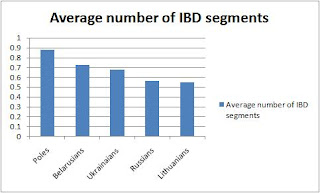